In early April I became aware that some of the hospital records for Rowley Bristow Orthopaedic hospital had been deposited at the Surrey History Centre. I sent them an email and asked if they could advise the depth of the information. Effectively was Mum named in the early records?

About two weeks later I received an email confirming that I need to prove my right of access to the records. I gathered a set of documents; my birth and marriage certificate, Mum’s death certificate and the page from my Passport as my ID. The document chain between Mum and myself. I composed the email confirming what I hoped they might find and hit send.

Would the records show Mum in them? The wait was lengthy, or at least it seemed that way.  Then yesterday I received a letter in the post. Through the window in the envelope I could see the email address for Surrey History Centre, so I knew what it was. Yet even though I had waited, somewhat impatiently for the reply. I had it in front of me, I waited about three hours before opening it. 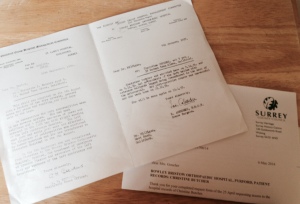 The contents were pleasing and disappointing. The records provided two references to Mum.  Her admission to Ottershaw Isolation Hospital and then her subsequent discharge and admission to Rowley Bristow. Bingo! and it confirmed the details from the letter I had discovered in her GP notes on Wednesday.

There are no other documents located at the Records Office that relate to Mum. That effectively means one of two things.

Rowley Bristow closed in 1990 and all its functions moved to St Peter’s Hospital in Chertsey. St Peter’s has now merged with Ashford hospital and now forms part of Ashford and St Peter’s NHS Trust.  I suspect that any that were not deposited were destroyed and I am awaiting a response from St Peter’s.

As I sat looking at the details I had unearthed I was suddenly aware that Mum and I could have at any time looked into this before. Mum had never in all probability seen the letters I had discovered in her notes.

I feel a degree of sadness, but the letter I had unearthed showed the physical symptoms Mum had experienced and I think it was probably that, in addition to her genetics that made her into the petite and yet strong character that was Mum.

When Stuart came home, I shared the news with him. His response sums it up nicely. “She should be here”